HAT: e– and H+ move together

Our laboratory has developed a detailed and often predictive understanding of hydrogen atom transfer reactions of metal-containing active sites. These are central to a variety of metalloenzymes, such as cytochrome P450s and non-heme Fe and Cu oxidases. Such reactions are one type of PCET reaction, in which e– and H+ transfer from one reagent to another: AH + B <-> A + BH.  We have shown that a wide variety of metal active sites can react by hydrogen-atom transfer, including Fe, Mn, Co, Cu, Cr, Ru, and Os complexes, iron porphyrin compounds and iron-sulfur clusters. We have developed a model based on Marcus Theory that rationalizes and can quantitatively predict this reactivity. The key parameters in this model are the driving force (∆G°) for H-atom transfer – the strengths of the bonds being cleaved and formed – and the Marcus intrinsic barrier. As shown in the figure below, the Marcus cross relation holds for a variety of metal complexes over a large range of driving forces and rates. 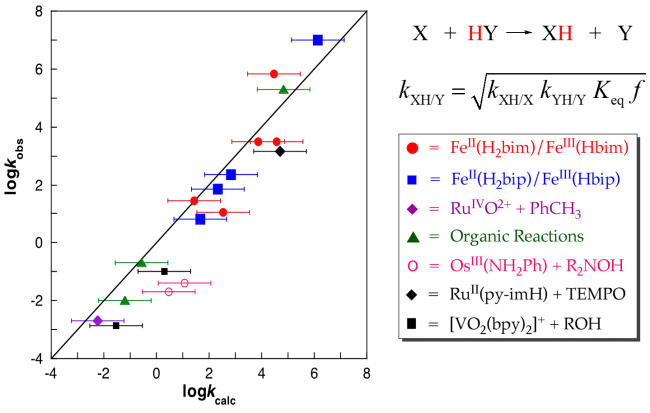